We have decided to advertise our little club The SB Tabletop Gamers around the area so I figured why not plaster one of the flyers up here in the great cyber of spaces ......


And of course another shameless add for the X-Wing tournament I'm running in February.


And a Shout out to Best Coast Pairings who's app and website I'll be using for running the tournament.


Best Coast Pairings is an awesome app that allows you to run your Swiss round tournament, and will put the pairings on the website live and email your players at the start of each round. You can even set it up so people can pay for event tickets on their site. And after having a quick email conversation they seem like top blokes as well

Part of my newfound responsibility for Fantasy Flight Games and Privateer Press sprooking is running events at the club and when we have the opportunity at other venue's. Tournaments aren't overly difficult; swiss draw works well and then tally the points at the end of the day, at least as far as book keeping goes. The prizes, herding cat's, sorry players and organising the venue are all important but it's all structured around a single day or weekend which makes it nice and compact and manageable.

Campaign's and Leagues on the other hand are sprawling affairs that require you to keep people focused, playing and having fun for weeks or months at a time. I've had my share of failures and false starts with campaigns in the past and it really comes down to the fact that in the beginning at least, they were horribly complicated things with multiple people moving over maps and some people getting games and others not, because of map placement and the unpredictability of the participants. I've learnt from my mistakes and stick to the KISS principle these days. My trepidation these days comes more from scoring than anything else these days.

My local club the SB Tabletop Gamers have run a few campaigns for different systems over the past year and there has been something bugging me about the scoring for each of them. They have been fairly loose in restriction on how often you can play to give people the opportunity to play as much as they want and have all of their games go towards the event. This on the whole is a good thing and has seen an upswing in participation and a large number of games being played, however this has the potential to give a fairly large advantage to the people who have the opportunity to play a lot of games over those, who, for variety of reasons can't get as many games in.

This system has worked, and I'm not looking to tell other people running campaigns how to do things. As much as anything else I'm looking for a different way to run things in order to differentiate my campaign from the others being run throughout the year.

My primary issue is that if I have time to play 20+ games and all points are simply added together, and loose more than I win (something I'm capable of doing), and another player only manages 6 games and wins them all, unless we have a fairly large split in points between win and loss I'm going to finish higher in the ranking even though my win loss ratio is shocking compared to the other player.

I've been doing a fair amount of thinking about this of late and I think I've come up with something that I don't think will penalise the player who plays a lot of games like a straight average could, when compared to someone who only plays a few and has good win loss ratio. and similarly doesn't lock you into X number of games and stifle the enthusiasm of the player who can and wants play lots of games.

I'm thinking of a 2 pronged attack with this; the first is to split the league into a number of rounds, we usually run a league or campaign for around 12 weeks so 6, 2 week rounds is manageable. play as many games you want in that 2 week period and record them, then at the end of that round average your points but instead of recording your average score you would record a full win, loss or draw for the round depending on what your average is.

Example: if a win is 5 points, draw 3, and loss 1 and you average 4.5 for the round you would record a full 5 points as a round score.

Where I'm having an issue at this point is deciding where you would call the difference between draw and win or loss, Do you call an average of exactly 3 a draw and anything else a win or loss? I'm more inclined to think that calling anything within a a 10% or 20% variance of a draw, a draw. In this case given the same scoring method and a 20% variance anything averaging between 2.6 and 3.4 would be a draw, anything else a win or loss.

The second prong would be to have a win/loss difference recorded with each game weather it be the difference in VP's in a traditional sense like Warhammer of old or the difference in objective points for games like the Batman Miniatures Game or Infinity. You would record you most favourable winning margin for the round, biggest margin for a win, smalls negative margin for a loss. the average margin across the 6 rounds would be used as the tie breaker.

I'm hoping that this would give a fair game play victory condition for the event that allows people who can't get a lot of games in and those that can to compete on an even standing. I'm also of the opinion that there should be a separate standing for the most points scored full stop, in order to encourage the playing of as many games as you can. because if your having fun you shouldn't feel as though there's no point playing as many games as you can.

For an X-Wing Campaign the awards I would be looking at would be 1st, 2nd, and 3rd for gameing. Along with most points overall no averages just everything added together, a Best Average Margin, and a ranking system for the number of rounds played in using the fictional Imperial Officer ranks.

The total award structure would look something like this;

Assuming I was to run a campaign for Warmachine, Infinity, or any game that you build and paint miniatures or terrain for there would be something for the hobby side of things as well.

I would encourage any feedback in regards to what I've proposed both scoring and prize giving. I want to run events that are both fair and fun without stifling peoples enthusiasm, and without adding too much complexity. The X-Wing Miniatures game will be the first I put this to the test with in mid or late 2017. I know it's a quite a way off but I want to get this right and a little time helps to put things in perspective.

Hi Everyone, welcome to the all new Project Circle. Over the last few years my gaming interests have had a bit of a shift along with not having a dedicated space for painting and modelling (something I want to change) has meant I haven't had any content to post. I have however missed posting and I've decided to make a bit of a change and broaden the scope of what I write about here.

I'm currently running a Pathfinder RPG Campaign and playing in a D&D 5th Ed Campaign, and while I'm not a fan of writing campaign journals the occasional amusing anecdote will find their way here. Things like Rat Man PC's being eaten by Giant Frogs, and bar fights caused by really bad slight of hand roll induced games of grab arse. 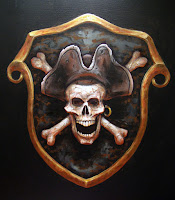 I've recently taken the mantle of Fantasy Flight Games and Privateer Press games representative for the SB Tabletop Gaming Club, so I'm keen to see in an upswing in the number of games I'm playing particularly in the forms of Warmachine and X-Wing. I'm looking forward to the challenge of leading the charge for these two company's games. I already have an X-Wing tournament planned for February next year, and I'm real keen to get my hands on the new tournament packs that are being released next year, unfortunately this isn't a done deal yet but I'm hopeful. A small table designed for demo games of X-Wing is also in the works. There are a few things I want to sort out for Warmachine and the huge number of boardgames both company's produce. At the moment the club has more support for X-Wing so that's where my efforts will be focused for the time being, It's also nice to have a firm idea where to start and FFG has a lot of material available for tournaments, leagues and demo's available on their website

See You Next Time
Posted by Hungry Drop Bear at 09:49 1 comment: